Triangle Telephone Cooperative Association, Inc., doing business as Triangle Communications (Triangle), is planning to hold its 67th Annual Meeting of Members in a new way, with one northern meeting and one southern meeting. The meetings will be streamed live on our website.

The northern meeting will be held Saturday, October 9th, 2021 in Havre, MT on the campus of Montana State University-Northern. The southern meeting will be held October 16th, 2021 in Big Timber at the Sweet Grass Fairgrounds in the Community Center . A quorum must be met at both locations, which means a minimum of 50 members must be present for a quorum at each meeting.

Registration will begin at 8:30 AM and the business meeting will begin at 10:00 AM with lunch served following the meetings. The full agenda will take place at both meeting locations. If any floor motions are made at the northern meeting, they will be carried over to the southern meeting before it will pass or fail. Voting for the Trustees will be held at both meetings for Districts 1, 3, 4 & 5. Members can vote at whichever meeting they attend, but a member can only vote once, even if the member attends both meetings. All members’ votes will be counted at the southern meeting in Big Timber. The cooperative attorney from Church Harris Johnson & Williams, will take custody of the ballots at the northern meeting and will hold custody of the ballots between the meetings. The cooperative will not have possession of the ballots between the two meetings and no voting will be allowed between the meetings.

There will be member gifts, as well as door prizes, including processed beef and pork purchased from local 4-H members. Up to six cash prizes will be available to members’ children in attendance. The final voting for the annual Triangle Photo Contest will take place at the meetings. One lucky member at each meeting will win the grand prize of an iPad Pro.

*Meetings will be held with guidance from the State of Montana as it pertains to COVID-19.

I would like to thank the nominating committee for selecting me to run for the District 1 board position again. It has been an honor to serve you in the past, and I will maintain that commitment if elected to serve in this position again.

We definitely have witnessed many challenges and changes in not only our personal lives, but also in the telecommunications industry as well, in the last several years. In light of that, our cooperative remains strong and is trying to be pro-active in looking to the future and anticipate your needs, not only for today and tomorrow, but well into the next several years.

This board position allows me to be a part of a strong leadership team that can help us all navigate through the obstacles and opportunities ahead.

The cooperative principle of member ownership and guidance is what is going to make Triangle Communications successfully into the future.

I would greatly appreciate your vote to re-elect me to represent you in OUR cooperative.

A little about myself, I was born in Glasgow, Mt and raised in Opheim, Mt. Son to a great man that kept a store going in a small community for years. When I graduated from high school I had a job already lined out which took me out of state (Texas) with a harvest crew in 1969, while away my father was getting notices from the draft board saying they wanted me to report for a physical. Didn’t seem all that important so I finished my obligation with my boss by going back down for maize harvest which got me back to Opheim late November and then the letters were so serious that I went for the physical in Butte being put in charge of over fifteen other men, was to make sure they got there. The experience made me adjust my thinking and there by I went to the Navy recruiter to give myself some say as to where and what I would like to do for my military obligation. It resulted in over thirty seven years of full time and reserve military duty.

My main goal was to be a farmer rancher for which I spent my summers doing while in high school, past up many opportunities while keeping this quest in mind. Have college, first at the University of Montana with the GI bill and then happened on a great summer job with another harvest crew while transferring to the University of Montana Northern. Took auto body courses which led to a job with Big Bud tractors during the time when we built the worlds largest. Had a home on the north side of Havre till Big Bud down sized. With my military reserve and many other jobs kept me going till I was called back to Opheim since my father was having health issues and needed someone at the store. That and many other small jobs to keep going with my family of three which became four in Opheim, something that made my father so happy for he got to spend time with his grandchildren. My wife (Micki) and I have been married forty eight years and have three daughters. One of the jobs was bus driving for the school which I enjoyed, going to and coming back from my route with no one on board was a great time to reflect. Ranching and farming were always part time jobs that I enjoyed as well.

When transferring from Reserve to Guard (Montana Army National Guard) was a whole new requirement on my military career which took me to many duties such as fire fighting and military bases with MOS specific jobs. Was fortunate in that with the down turn in the economy the store wasn’t doing well so had the opportunity to go full time being brought on board as a manager for a training site that we utilized the former Glasgow air force base. Almost three years but it didn’t go as planned, and then I became a Supply Sergeant with an infantry company. Retired from full time but not till I was deployed to augment a Military Police company (the draft did not get me but stop loss did) giving me over twenty years of full time service. After the military I went to work for JC Penny Company as there stock control clerk, Williston ND and Sidney Mt.

We were living in Culbertson Mt far from our grandchildren but a great opportunity came about and we were able to sell the house and move to this wonderful community of Big Sandy Mt. Hard to believe that it has been over nine years.  With several retirements life is good here and couldn’t ask for a better home and great friends.

- Mine Inspector regarding reclamation statutes: 3 years

My thanks to the nominating committee for the opportunity to run for Trustee from District #4.

Along with his wife, Rosemary, Richard operates his family’s beef cattle ranch north of Chinook, which he has done for the last forty-one years.  A graduate of Montana State University, Richard worked briefly for the Production Credit Association before returning to the family ranch.  He enjoys traveling with his wife Rosemary to visit his son in Bozeman and his daughter in Missoula.  In his spare time he enjoys reading and time spent in the company of friends and family, particularly his siblings, nieces, and nephews.

Richard also participated on the Chinook School Board for nineteen years and the Montana School Board Association for eight years.  Through the Montana School Board, he served on the Workers’ Comp Committee, Safety and Loss Committee, and Property and Liability Committee.  Richard has served on the local Grazing District for twenty five years and the Montana Association of State Grazing Districts for eleven years.  In addition, he was appointed by the Montana Governor for two, four year terms on the FWP Commission as vice chairman, four, two year terms on the Private Lands Public Wildlife Council, and two, three year terms on the Montana State Grass Commission.  While serving in these positions, Richard was elected multiple times as Chair, Vice-chair, and Secretary/Treasurer.  Richard also served as a 4-H Leader and an MOA official for Wrestling and Swimming.

Richard possesses a passion for knowledge and participating in his community.  He takes the responsibility and the honor of participating on state and local boards seriously, devoting great amounts of time to ensure that his vote is cast in a balanced and informed manner.  Richard believes very strongly that our local co-ops remain a great asset to our Montana communities, and places great faith in our ability to improve the quality of life for Montanans through community engagement.  He remains committed to responsible stewardship on behalf of Triangle’s member owners, and encourages all members to take an active interest in their local cooperatives. 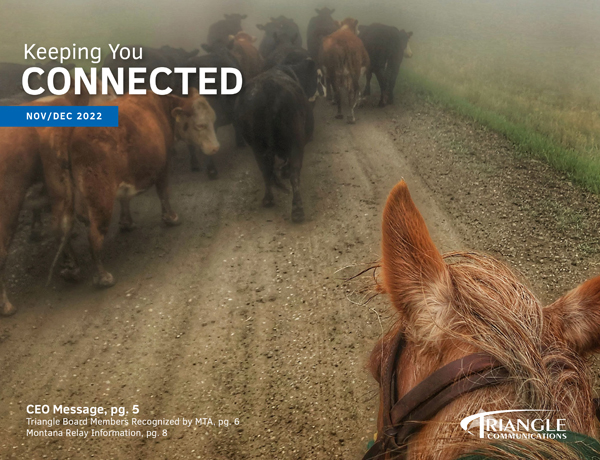