The telecommunications industry has come a long way since Alexander Graham Bell made the first landline phone call on March 10, 1876. Even after that first call, phones were not commonplace. Only the wealthy were able to afford them. At the start of WWI in 1914, there were 10 people for every connected phone in the United States. That number dropped to five people per working phone by the time WWII ended in 1945. By 2017, there were over 455 million telephone numbers in the United States tied to mobile, landline and Voice Over Internet (VoIP) phones.

We are very proud of Triangle’s part in the history of the telecommunications industry as well. Triangle Telephone Cooperative Association filed Articles of Incorporation in 1953. By 1956, Triangle had connected 1,005 subscribers with telephone service in 10 North Central Montana exchanges. Triangle expanded our service area and added more members by purchasing the Winifred exchange in 1958, followed in 1959 by the Chinook Telephone Company. By 1960 Triangle had added 9,000 square miles of serving area and 1,850 subscribers. We weren’t finished yet, in 1980 Triangle purchased from Continental Telephone six exchanges in south central Montana and in 1993 we expanded our territory even further by purchasing 13 exchanges from the former US West, now called Century Link. Triangle is proud to now serve a little over 14,000 lines in 16 counties from the Canadian border to the Wyoming border across 23,000 square miles.

At Triangle providing our members with the best service possible is our top priority. That is why in 2007 Triangle began looking to upgrade our service areas to fiber. With the large expense to upgrade our vast service areas, we strive to connect as many members as possible to fiber within the budget for the project. Right now, 75% of our members are cutover to fiber.

I wonder what Mr. Bell would think of the present day where we are using glass fibers to send voice calls and data all over the world. 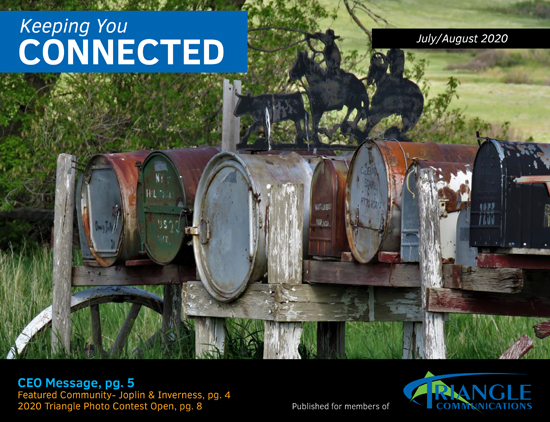